This morning’s lead story on the British Broadcasting Corporation’s World website:
A crowd of “between 20,000 and 50,000 people” have marched in Budapest to call for the resignation of Hungarian Prime Minister Ferenc Gyurcsany after he lied to the nation.

This morning’s main story on the Bahrain-based Gulf Daily News website:
“Tens of thousands of protesters” have marched in Manchester to call for the resignation of British Prime Minister Tony Blair after he lied to the nation.

If you are interested in the Spanish Civil War check out the competition here: http://www.bbc.co.uk/wales/southeast/fun/competitions/forms/latest.shtml

The answer is Return Journey, by the way.

Also, A Bullet Saved My Life was the pick of the week in the Morning Star
http://www.morningstaronline.co.uk/index2.php/free/culture/books/a_remarkable_life

Carefree Arms. Evening.
Late night discussions. Conversations we’ve had before, are comfortable with.
Same observations made but treated as revelatory as it is in all drinkers’ interest to remain entertained.
Jenks rails against the former kamikaze pilots you see interviewed on the History Channel.
“Can’t understand it, man. How can you be a ‘former’ kamikaze pilot?”
“You’d rather they’d flown into the side of a ship than gone on to be retired bank managers or something?”
“I just think they should be …ashamed!”
I was watching the Niall Ferguson programme where he said the Americans believed the Japanese were animals during the Pacific war and so the Japanese acted like animals.
Each side brutalised the other.
“Act like animals, treated like animals,” Jenks said defiantly, putting his glass to his mouth and spilling large amounts of lager down his chin.

Carefree Arms. Lunchtime yesterday.
I walk in the sunshine to meet my friend Tom (not his real name). I miss him. But Mr French, who Tom once introduced me to, is.
He has a bottle in front of him so I go inside and get a drink.
Mr French – not his real name either – is a fixture. As people pass, one-in-three say ‘hi’ or pass a comment.
I joke with him that it is lunchtime and they are jealous as they are only grasping a few minutes of freedom before heading back into the office.
It’s all friendly, though. None of the passers-by make that pretence at not seeing him, as they might with a busker or beggar.
He tells me a story about a boy and his uncle. The boy had been badly treated by his father as a child and had grown to love his uncle. They would go mountain climbing together; not speak much, but share the joy of views, smells, back-breaking walks, danger, excitement.
It’s a world away from our metal chairs on the street outside Carefree Arms.
“One day, on the mountain,” says Mr French, “the uncle turned to the boy and said, ‘When I die, no matter what anyone says, burn me and bring me up here.’ And when he died, that’s what the boy did. When he told me, I felt it.”
Mr French’s eyes are welling up now.
“You make an agreement with a friend, you stick to it,” I said, sounding like Pike Bishop in The Wild Bunch.
Mr French, not talking for a moment, but swallowing his Adam’s apple firmly, nodded.
We are silent. After a while, Mr French said: “My wife hates me, you know. But she hates Tom more.”

The Path to 9/11
Some thoughts.
Firstly, shouldn’t the “path” to that atrocity have included some reasoning behind the terror strikes, some explanation of America as choice of target?
Secondly, how come the US security experts depicted here knew nothing about Osama Bin Laden when the CIA had funded him in the 1980s?
Thirdly, yes, it was fantastically well made. But it felt uncomfortably like some awful episode of ‘24’, depicting life at CTU when Jack Bauer is on holiday and unable to save the day. This was reinforced by an actress from the series in the role of Condoleezza Rice.
Fourthly, the events of that day have lost none of their ability to shock and upset. It combines so many fears: terrorism, plane crash, tumbling buildings, trapped by fire. The sheer callousness of it all sticks in the throat. But the reconstruction of the Manhattan streets when the towers collapsed had to be the most redundant piece of film-making ever: everyone has the real images of billowing rubble, dust, shredded clothes and paper indelibly imprinted on their minds.
Someone said to me yesterday, quite innocently: “My God, September 11 has been on the radio all day.”
My first reaction was: “Of course, it was September 11, you fool!”
But then I thought about the Rwandan genocide where there were 3,000 victims every day for 100 days – before noon.
And of the 100,000 or so people who have died in Afghanistan and Iraq. Where are the wall-to-wall drama-documentaries and TV movies about them?
Where are the reconstructions of them kissing their wives goodbye as they head off to work on their final day?
I’m not saying the suffering of September 11 does not deserve to be remembered. Of course it does.
But doesn’t the overwhelming focus on one nation’s suffering suggest we have learnt nothing?
We keep hearing that we value every innocent life the same, but it doesn’t always seem that way in practice.
Until we recognise that, we are destined to keep witnessing events which will be marked every five years by grim films like The Path to 9/11. 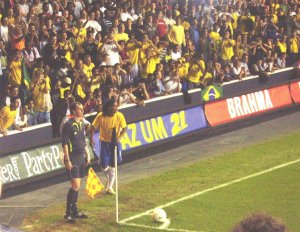 Excellent performance by Wales last night.
I know you are not supposed to say that after a defeat, but it was Brazil.
Wales held strong until the second half, run-out substitutions.
Bale, Duffy, Giggs and Collins, all had excellent games.
So did the fans in the Wales end.
Two great goals from the Brazilians and as a first half shot went wide from the South Americans and spun in our di

rection it met a crowd of hands and then hit my wife on the head.
She had her eyes closed but she is very pleased to have got on the end of a ball by either Baptista or Edmilson (we were too excited to see who struck it).
I’m proud of her work.
September 6, 2006 0