The sun shone brightly as the clocked ticked towards 3pm on Saturday. The Wales fans on Hill 16 were in good voice and bouyant mood.
But within minutes of the start, heads were in hands.

As we drifted back across the Liffey, the sun dipped its head. People were too stunned even to try to understand how the team had played so much like amateurs. 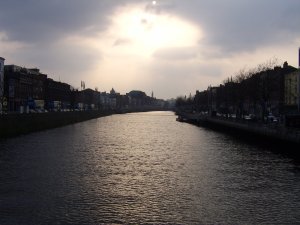 Yesterday, a photograph arrived from Dublin. It’s said to provide an excuse as to why Wales appeared to lack concentration from the start…

Psst! Do you want to know a secret?
Alright, it’s not much of a shock.
But do you remember all that silly old Iraq stuff about No War for Oil?
Silly marchers, silly banners, and all that. Silly, wasn’t it?
Oh, how They scoffed.
What we should have been highlighting, it seems, was oil as a bi-productive of war.
We can confirm that now. We have a decent source: dear old Kim Howells, Pontypridd MP, and NUM firebrand-turned Blair bootroom-boy.
Dr Kim has given a written response to a Parliamentary question asking what meetings our government has had with oil companies to discuss Iraq since the 2003 invasion.
“Our work on Iraq’s economic and energy sector has included contacts with oil companies, as well as trade unions representatives and non-governmental organisations,” said the dedicated Foreign Office minister.
“These exchanges have included discussion of Iraq’s evolving hydrocarbons legislation where British international oil companies have valuable perspectives to offer based on their experience in other countries. Discussions with international oil companies on hydrocarbons legislation have included the range of contract types which Iraq is considering.”
So, waffle aside, international oil companies have been giving their view on the future of the world’s second largest oil reserves. How long, I wonder, did it take to wipe the oil execs’ saliva off that boardroom table?
In fact, Britain and America are putting pressure on Baghdad to pass a law – “evolving hydrocarbons legislation” – which would hand long-term control of Iraqi oil reserves over to foreign multinationals.
“Exploration contracts” would allow the oil giants to sink their fangs into the country’s untapped fields.
Didn’t see that one coming, did you!
The Iraqi trades unions want its oil reserves kept in public hands. But who will listen to them?
Back in July 2005, Hassan Juma’a Awad al-Asade, leader of the country’s General Union of Oil Workers, said: “The first stage of the occupation of our country was to seize the oil fields. Now, the second stage is under way, and this is the privatisation of the oil and manufacturing industries of our country. We are against this because it is against the interests of the Iraqi people.”
This month, he added: “History will not forgive those who play recklessly with the wealth and destiny of a people.”
Iraq is struggling with violence and poverty. “Yet, with the support of our government, multinationals are poised to take control of Iraq’s oil wealth,” said Ruth Tanner, of War On Want.
Unable to negotiate with the oil giants, Iraq will watch a carve-up of its own natural resources. That’s money that in the hands of the Iraqis themselves could be used to rebuild a country devastated by dictatorship, sanctions, war and occupation.
A year ago this month Dr Howells visited Iraq to examine the oil industry. Afterwards, he admitted to Radio 4’s Today programme that Iraq was a “mess”.
“But it is a mess that can’t launch an attack now on Iran; a mess that won’t be able to march into Kuwait; it’s a mess that can’t develop nuclear weapons,” he said.
“So, yes, it’s a mess but it’s starting to look like the sort of mess that most of us live in.”
Like a mess “that most of us live in”!
Could that be the most offensive thing said about Pontypridd? Or did Dr Howells mean something else altogether?
Maybe he meant Iraq’s just another place held over a barrel by energy companies.

:: The above was written for Big Issue Cymru (March 5). There’s more on this story in today’s Independent On Sunday
http://news.independent.co.uk/business/news/article2347416.ece