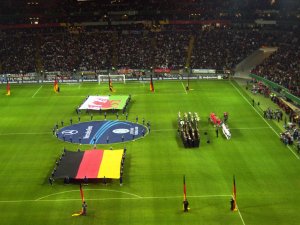 Great atmosphere in the cold, dark woods outside Frankfurt on Wednesday as just under 50,000 fans made their way to the Commerzbank-Arena.
Few believed, though, that Wales would come away with anything other than a four or five goal defeat.

In the end, it was a night of celebration. One of those nil-nils which feel like a victory.
Behind me a group of fans counted down the clock to see who was going to win a sweepstake on the first German goal. Two minutes gone. Then five. Seven. Ten. Twenty-two. Suddenly, it was half-time and Wales were doing more than holding their own.

On the hour mark thoughts went back to the San Siro during the last European championship campaign. We were keeping the Italians out that night after 60 minutes but got well beaten by four late goals.

It wasn’t to be the same on Wednesday, though. A great and passionate performance by Toshack’s men.
There was something else different from the night in Milan: the home fans.

Many Italian fans acted appallingly that night. The Germans were gracious and friendly.
There was no segregation so in Block 17N Welsh and German fans mingled and chatted.
Many celebrated the score coming through from Wembley; others laughed at the Welsh fans who suddenly discovered that the ‘bier’ they had been allowed to bring to their seats during the game was actually alcohol free.