Protesters say they’ve found the first chinks in the armour of the arms and defence consortium behind the new St Athan training academy.
Much is being made about the educational courses which will be on offer at the massive base – and the Open University’s involvement in the Metrix Consortium is key to that.
The OU has a commitment to “social justice”. But as one campaigner put it to me: “How will the OU feel if in a few years time Burmese troops are being trained at St Athan?”
It seems people within the OU have been asking similar questions.
Following a demonstration outside the OU offices in Cardiff recently its Wales director Rob Humphreys said its involvement was about “delivering the highest possible quality of support” to Britain’s armed services.
However, when I pressed the OU on claims that staff had been contacting demonstrators with messages of support and that there might even have been discussions about leaving the consortium, the OU was less bullish.
“Any community as large in number and as diverse in opinion as the Open University will include people who hold differing views about some of their organisation’s activities,” came the response from its Milton Keynes HQ.
“More than anywhere else, it is in a university that such diversity of opinion and discussion of issues are – and should be – found. In this case, a very small number of staff have raised concerns about the University’s involvement, and their concerns are noted.
“The involvement of the University in all major projects with external partners is reviewed regularly by senior managers as part of good business practice. The University’s participation in the Metrix Consortium is no different.”
Watch this space then, as the old gossip columnists used to say.

Comedy’s hot property at the moment is Wales-made ‘Gavin and Stacey’ and in a recent programme Gavin and his mum had problems at the Severn Bridge when they couldn’t find cash.
“Don’t they take card?” said mum. “Everyone takes card.”
Welsh Lib Dem leader Mike German spotted an opportunity for a press release.
“Gavin and Stacey may be a comedy, but it highlights a very serious issue, one that hits the people of Wales hard,” he said. “The Welsh Liberal Democrats have repeatedly called for changes to the Severn Bridges Act to allow road users to pay by credit or debit card.”
Far better for Mr G to continue with his other campaign – reported only four months ago – to get the charges scrapped.
As he pointed out then, the tolls on both bridges have already raised £684m – more than double the cost of the 1996 second crossing.
And there’s no sign of a free crossing for some time to come.
In February UK transport minister Rosie Winterton said the tolls would have to raise £995,830,000 before motorists would stop shelling out.
No laughing matter at all. 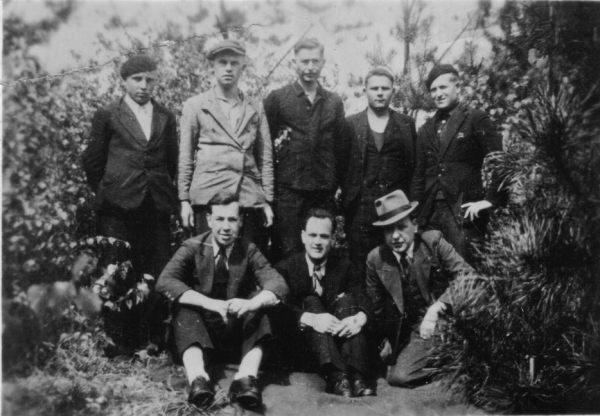 Back in the 1970s the BBC produced a critically-acclaimed drama series called Secret Army.
The programme followed the exploits of a group of ordinary Belgians who ran an evasion line, helping Allied airman return to Britain after being shot down.
The series was based on the Comet Line, a network established by a young Belgian girl, Andrée de Jongh, who died last year.
One of the men saved by the line was John Evans from Goodwick in Pembrokeshire.
Airman Missing (see left) tells the story of John’s life behind enemy lines and, in particular, pays tribute to the brave volunteers who saved his life.
It also describes how he tracked many of them down after the war. There were some tearful reunions.
And there were sadly others who had not survived to be reunited with those they had protected during the dark days of Nazi occupation.
:: Pictured John Evans (in the hat) hides out in a Belgian wood in 1944 with fellow airmen and escaped Russian prisoners of war.

The Open University is apparently facing pressure from its own staff over its part in Metrix Consortium, the developers behind the St Athan military training academy.
I’ve spoken to OU about these concerns and about whether it is considering pulling out of the consortium – the full report is in the Big Issue Cymru (April 21).
Thanks to Luther ap Blissett for flagging this up.

Hold The Front Page has reported journalists’ concerns about provisions in the Counter-Terrorism Bill which could affect media investigation and reporting.
These include new offences of eliciting, publishing or communicating information about members of the armed forces, new search and seizure powers and new ministerial controls over inquests.
The Newspaper Society has written to Home Secretary Jacqui Smith.
:: Photographer or terrorist?

Digby Jones is poised to leave Gordon Brown’s government of all the talents (Goat) before the next election.
Perhaps future goats brought in by the Labour Party will represent areas of society which have less access to power than Lord Jones’ friends.
Jones, after all, is hardly a champion of the voiceless and the vulnerable.
A corporate lawyer by background, his previous senior corporate advisory positions have included senior advisor to Barclays Capital, chairman of the Deloitte Industries Group, corporate and governmental affairs advisor to Ford of Europe and Premier Automotive Group, advisor to JCB and member of the advisory board of Aggregate Industries.
His period in government has given big business the ear of Gordon Brown.
But it has surely helped the individual too – particularly, if that individual is Lord Jones. His consultancy and after dinner fees are certain to rise.
He also, of course, got a peerage out of his entry into government. Will he now hand that back, as suggested by one MP?

There will be a demonstration in memory of Ama Sumani later this month in Cardiff.
Ama died in Ghana on March 19 after being removed from the University Hospital of Wales while receiving treatment for cancer.
Campaigners hope that the event will be both a tribute to Ama and a message to the authorities.
“This protest is important because we have to make sure this kind of thing doesn’t happen again” said Janet Symmons, Ama’s friend and co-ordinator of the campaign.
“Ama’s tragedy touched a lot of people, but it is important to understand that there are hundreds of people in similar situations right now. I know a Zambian lady who has a baby daughter with brain damage, a Cameroonian boy with Hepatitis – all have the threat of deportation hanging over them.”
The demo takes place at 1 pm at the Nye Bevan Statue, Queen Street, Cardiff, on Saturday, April 19.
* Thanks to Respectable Citizen for highlighting this event.