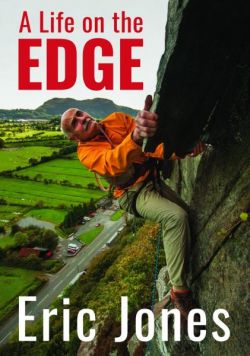 A Life On The Edge, reviewed by Lyn Ebenezer, author of Operation Julie and Fron-goch Camp 1916

I have never met Eric Jones, yet I feel as if I know him well. Two contributions on the back cover of his autobiography sum up my impression of his character. One is a long-range photo that picks him out on the north face of the Eiger, like a forlorn gnat slithering towards the upper reaches of a gigantic frosty window pane. The other is a quotation by fellow mountaineer Reinhold Messner: ‘Eric’s many solo ascents can be respected for being free of any sense of heroics, and for his sense of humour when his stories are told. His strength, self-sufficiency and silent courage are admirable.’

Jones may not have any sense of heroics, but he is a hero. Heroes achieve feats that we mere mortals can only dream of realising. Heroes are modest. Heroes are fearless. Heroes respect the challenges that lie before them. Eric Jones is a hero.

Summing up Jones’s achievements could, on its own, fill this chunky, liberally illustrated volume. Greg Lewis manages to compress them into his opening blurb: Jones was the first British man to climb the Eiger’s north face, he has soared over Everest in a hot air balloon, he has parachuted onto the North Pole, he has skydived into the Cave of Swallows in Mexico, and now he has written, with Lewis, a cracker of a story.

To someone like me who is terrified of heights (I live in a bungalow), Jones is a superhuman. Leo Dickenson, cameraman-climber extraordinary, reveals in his foreword that in fifty years of knowing him, he can never remember Jones refusing an adventure. Yet Jones has known fear – his greatest being chased by a cockerel. His fascinating tale leads us from humble beginnings at Brynsaithmarchog around and above – and in some cases below – the earth.

Heroes, of course, can be boring. Like cockerels, some tend to crow. Jones, however, understates his feats. Imagine him hurtling towards seemingly certain death on the North Face of the Matterhorn. Rather than panic, he merely hoped it wouldn’t hurt. Incredibly, despite such dangers, he manages to posses an inner peace.

Jones is the kind of man whose hand I would dearly wish to shake. But please let it happen on level ground!

See the original review on the website of the Welsh Books Council.