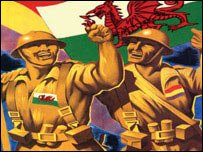 Head to the Dylan Thomas Centre in Swansea if you can.
The centre is the first host for the Wise and Foolish Dreamers exhibition, which is part of a major project about Wales and the Spanish Civil War.
It will tour every area of Wales over the next two years.
The exhibition, which was put together with pupils from three schools, tells the story of the war and explores themes of tolerance and nationalism.
The Dylan Thomas Centre is also hosting an accompanying festival of film and poetry. The exhibition will be on display there until May 20.
The project has had some great coverage, particularly from the BBC and South Wales Evening Post.
:: http://www.thisissouthwales.co.uk/displayNode.jsp?nodeId=161389&command=displayContent&sourceNode=161372&contentPK=17272736&moduleName=InternalSearch&formname=sidebarsearch
:: http://www.thisissouthwales.co.uk/displayNode.jsp?nodeId=161389&command=displayContent&sourceNode=161372&contentPK=17296369&moduleName=InternalSearch&formname=sidebarsearch

Mainly writing. Often thinking about writing. Sometimes out filming. Just written a book about fighting Nazis. It's a history book but feels horribly current. View all posts by Greg