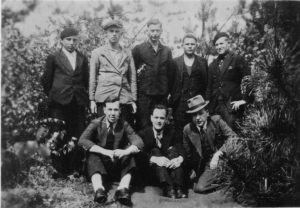 Back in the 1970s the BBC produced a critically-acclaimed drama series called Secret Army.
The programme followed the exploits of a group of ordinary Belgians who ran an evasion line, helping Allied airman return to Britain after being shot down.
The series was based on the Comet Line, a network established by a young Belgian girl, Andrée de Jongh, who died last year.
One of the men saved by the line was John Evans from Goodwick in Pembrokeshire.
Airman Missing (see left) tells the story of John’s life behind enemy lines and, in particular, pays tribute to the brave volunteers who saved his life.
It also describes how he tracked many of them down after the war. There were some tearful reunions.
And there were sadly others who had not survived to be reunited with those they had protected during the dark days of Nazi occupation.
:: Pictured John Evans (in the hat) hides out in a Belgian wood in 1944 with fellow airmen and escaped Russian prisoners of war.