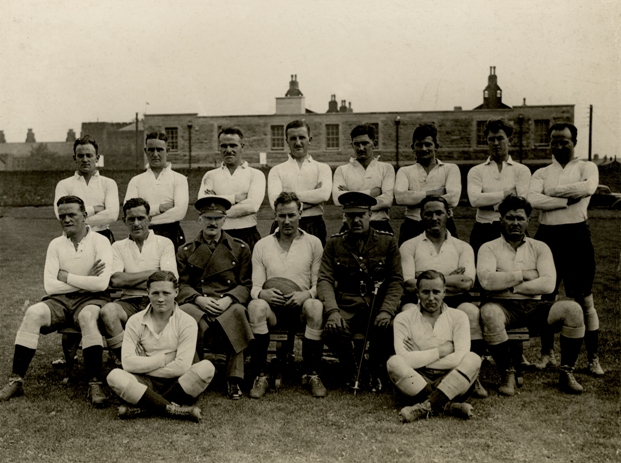 Many of its members were local sportsmen who joined up together, such as Les Spence, who been Cardiff Rugby Club captain during the 1936-37 season, and his team-mate Wilf Wooller.

Other sports stars in the 77th included Ernie Curtis who had been the youngest member of Cardiff City’s 1927 FA Cup winning side.

This photograph shows Les Spence (sitting, second from left) as he poses with other members of a rugby squad which is presumably related to his membership of the 77th. Wooller is sitting between the two uniformed officers.

Standing third from the left is Ken Street who would be killed in a train crash in Java in February 1942.

But where was the photo taken and who are the other players?

* Throughout the horrors of prison camps in Java and Japan, Les Spence kept a secret diary. From his camp near the city ofNagasaki, he was able to record one of the most momentous moments in history: the dropping of the plutonium bomb on Nagasaki.

“We had uneventful train journey to Nagasaki and then we saw the result of the atomic bomb. It was simply astounding, nothing left standing for miles, everything flat and burnt out.”

Les – who was later to become president of the WRU – risked his life to write the diaries. They will be published next year.

2 thoughts on “Who are the rugby players in this picture?”