Just found a wonderful memory of Cardiff’s historic win at the Twickenham Sevens in the spring of 1939 in an article from Wales Online.

The team featured Les Spence and Wilf Wooller who three years later would be captured by the Japanese in Java.

Les kept a secret diary (of which a lot more here: https://greglewisinfo.wordpress.com/tag/from-java-to-nagasaki/) in the camp and on April 25, 1942 he wrote:

“No working party today. Very hot. Played chess and bridge most of the day. Passed a very pleasant hour with Wilf reminiscing on our past exploits. Three years ago today we were playing 7s at Twickenham.” (‘From Java To Nagasaki’, Magic Rat Books)

In the Wales Online article from 2011, 91-year-old Graham Hale recalled how Cardiff were the only Welsh-based club to lift the trophy.

“Only our captain, Wilf Wooller, had ever played in Sevens before as it was not played in Wales and it appears he was in the Sale side that had won in 1936,” said Graham. “I was a centre then and with Wilf at outside-half, we had Gwyn Porter outside me and Willie Davies, the brother of the Wales prop Cliff, playing scrum-half, though he was really an outside-half.

“Willie was a splendid player but turned professional soon afterwards. In the forwards were Selby Davies, Evan Jones and Les Spence, while Wilf dropped the Wales forward ‘Wendy’ Davis, as Wilf said he was too slow.

“Selby, ‘Wendy’ and I had all been at Cardiff High School.

“We had never seen a Sevens match and watched the first one from the grandstand, the ground was full.

“We opened against the good St Mary’s Hospital side and the referee said we had two minutes left and we were losing 6-0.

“We ran down field and I was clear, but for some reason I stopped and dropped a goal.

“It was four points then and a try was three.

“It was the only drop goal I ever attempted!

“From the kick-off we got the ball and when I received it, I was again clear and scored to make it 7-6. I don’t think we attempted the conversion.”

Cardiff then beat the Met Police 5-3 and Birkenhead Park 8-5 in the semi-final.

The BBC broadcast had broken down and those in the Cardiff club were resigned to the team losing.

However, Cardiff met London Scottish in the final.

“Wilf was always loud off the pitch, but quiet on it,” added Mr Hale.

“He sat with me watching the Scotland fly-half Logie Bruce Lockhart run rings round their opponents.

“He said that if I got Lockhart low, he would take him and the ball high.

“We caught the train home with Wilf running down the platform as it was going.

“We got in the club that night and nobody knew we had won the splendid Kinross Arber Trophy.

“It was a great day to remember.”

Like Les and Wilf, Graham joined the army during the war and became a POW in North Africa. 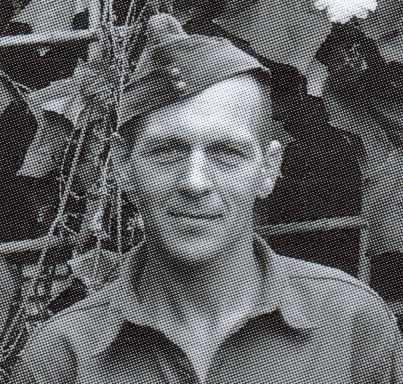 “We hear from the guards that one bomb blew up Nagasaki.” Les Spence writes in his diary, August 1945

For more than three years during World War II, Les Spence was a prisoner of the Japanese.

Spence, who would later go on to become president of the Welsh Rugby Union, had been captured in early March 1942 when British forces on Java were forced to surrender.

He would pass through a number of prison camps on Java, be held briefly at Changi,Singapore, and be made to work at a mining camp in Japan.

Throughout the whole time, Les Spence kept a diary, which is published in hardback this week as ‘From Java To Nagasaki’.

The surviving books begin at the start of 1942 with a convoy of ships heading for a destination unknown to those on board.

Les’ writing takes in the surrender of Allied forces on Java, the conditions and life in the camps and the growing death toll.

It shows how the prisoners learned to survive: bargaining for food, playing football and rugby, and maintaining a sense of discipline.

One of the most intense sections covers the prisoners’ journey in the suffocating hold of a so-called ‘hellship’, taking them from Java to Japan via Singapore.

Les wrote in three small books, covering the period right up to November 1945.

On his last entry Les, liberated and transported across the Pacific to the United States, has crossed to New York and boarded the Queen Mary for return to the UK.

There are many incidents which stand out from the diaries. But the fact that Les’ prison camp in Japan was less than 100 miles from Nagasaki when the bomb goes off is fascinating.

The camp slowly discover what has happened and, then, after Japan’s surrender, travel outside the camp to see how Japanese society has broken down under siege and attack.

The prisoners are then transported out of Japan via the docks at Nagasaki. Les records the state of the city as he passes through.

After the war, Les married his sweetheart Babs – with friend and former fellow POW Wilfred Wooller as his best man.

He returned to his love of sport. He was to become chairman of Cardiff Rugby Club and joint secretary of Glamorgan County Cricket Club, and was awarded the MBE.

By the time Les died in 1988, aged 81, he had become one of the leading administrators in Welsh sport. Memorial gates were installed at Cardiff Arms Park in his name.

It had been in perhaps his greatest role, as president of the Welsh Rugby Union, that he had helped take a small step to heal the wounds opened between the UK and Japan during World War II.

In 1973 he had formed a firm friendship with Shiggy Konno, manager of the visiting Japanese rugby side. And two years later he led the Welsh rugby team on a tour of Japan.

As the South Wales Echo reported: “[Les] learned to forgive if not forget the tragedy of war.”

It had been Les Spence’s wish that his diaries were one day published. His family tried to fulfil that wish shortly after his death but when the diaries were entrusted to a third party they were lost.

They were discovered years later in the back drawer in a newspaper office and passed to me.

This month, 70 years after that surrender on Java, they are published in full – with complete notes on the places and names mentioned throughout.

Before they even arrived on Java, Les confided to his diary: “It will be no picnic. I am afraid some of us will not see the end of next month.”

What he was to write over the next more than 40 months is a remarkable testament to courage and endurance in the face of hardship and cruelty – and a first-hand account of how to hold onto hope when all seems lost.

* South Wales Echo covers the launch of ‘From Java To Nagasaki’

* Western Mail covers the launch of ‘From Java To Nagasaki’ 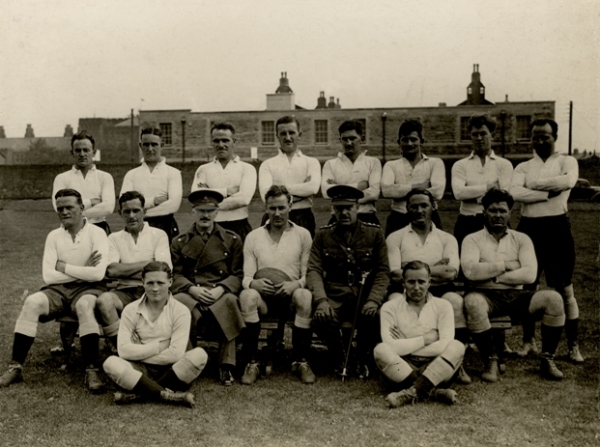 Many of its members were local sportsmen who joined up together, such as Les Spence, who been Cardiff Rugby Club captain during the 1936-37 season, and his team-mate Wilf Wooller.

Other sports stars in the 77th included Ernie Curtis who had been the youngest member of Cardiff City’s 1927 FA Cup winning side.

This photograph shows Les Spence (sitting, second from left) as he poses with other members of a rugby squad which is presumably related to his membership of the 77th. Wooller is sitting between the two uniformed officers.

Standing third from the left is Ken Street who would be killed in a train crash in Java in February 1942.

But where was the photo taken and who are the other players?

* Throughout the horrors of prison camps in Java and Japan, Les Spence kept a secret diary. From his camp near the city ofNagasaki, he was able to record one of the most momentous moments in history: the dropping of the plutonium bomb on Nagasaki.

“We had uneventful train journey to Nagasaki and then we saw the result of the atomic bomb. It was simply astounding, nothing left standing for miles, everything flat and burnt out.”

Les – who was later to become president of the WRU – risked his life to write the diaries. They will be published next year.