On March 28, 1942 more than 600 men left Falmouth in Cornwall in a flotilla of three destroyers and 16 smaller boats.

The special fleet included HMS Campbeltown which was packed with explosives and was to be used to ram into the gates of the docks of the French port of St Nazaire.

St Nazaire was targeted because the loss of its dry dock would force any large German warship in need of repairs, such as the Tirpitz, to return to home waters rather than having a safe haven available on the Atlantic coast.

The raid put the dry dock out of commission until the end of the war – but success came at a cost. Of the 622 men of the Royal Navy and Commandos who took part in the raid, only 228 men returned to England.

One hundred and sixty-nine men were killed and another 215 became prisoners of war. The fallen British raiders were buried at the Escoublac-la-Baule cemetery, near St Nazaire, with military honours.

Five of the raiders escaped overland via Spain.

Eighty-nine awards and medals were bestowed for the raid, including five Victoria Crosses.

*A version of this article was first published on jonkilkade.com

November 11 1943 is, I understand, a well-remembered day for historians of the Resistance in Nazi-Occupied France.

It was on that day that the Maquis paraded through the town of Oyonnax in an event designed as a show of strength, a morale boost for the local population. The town was chosen because there was no German garrison nearby.

More than 200 Maquisards took part. They marched, sang the Marseillaise, and then disappeared back into the mountains. The event is described in Matthew Cobb’s excellent book The Resistance.

Sometime ago I came into possession of this small medallion. It features the date ‘XI Novembre, 1943’.

One side is the Cross of Lorraine smashing a Swastika.

On the other side is an Astrix-like warrior.

I would love to know the story behind it. I assume it relates to Oyonnax, but does it?

When was it created? How many issued?

Writing Tom Sharkey’s biography meant we got to “meet” many of the great characters of old-time boxing.

Sharkey wasn’t the only wild character among them.

One of our favourites was “Kid” McCoy – real name Norman Selby – who faced Sharkey in January 1899 as a boyish-looking 26-year-old and had fast become one of the most notorious figures ever to step in the ring; a talented fighter, yes, but a trickster too. 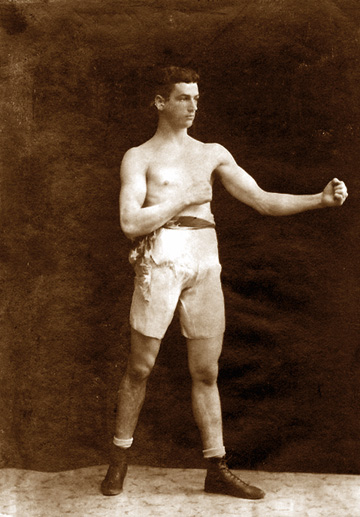 According to Patrick Myler: “The numerous stories told about his trickery, mostly apocryphal, are a treasured part of boxing folklore.”

He was said to have once filled his mouth with loose teeth and spat them out during a bout, horrifying his opponent and delivering a knockout punch on his unguarded chin.

He also scattered thumb-tacks on the canvas when he took on a fighter who fought in bare feet.

One particularly dirty trick involved Peter Maher. McCoy sent him a fake telegram, shortly before they were due to fight, saying there been a sudden death in the Irishman’s family.

As another writer, Graeme Kent, has noted: “McCoy was a brilliant boxer and an extremely shrewd operator who had sailed close to the wind on a number of occasions.”

His name lives on with us to today as a way of describing the genuine article. Myler reckons this relates to confusion with a lesser-known fighter named Peter McCoy, who was also known as “Kid”. He says a newspaper once ran the headline, ‘Choynski is Beaten by the Real McCoy’ and the phrase stuck. Kent prefers a story more in keeping with ‘Kid’ McCoy’s trickster image. He says that McCoy, trading on the drawing power of his name, sometimes booked himself to appear in different places at the same time and sent along ringers.

“Promoters had grown wise to this ploy and had insisted on the Kid being less generous with his doppelgangers,” notes Kent. “To reinforce this point they had taken to billing the boxer as ‘the real McCoy’, a phrase which later entered the lexicon.”

I FOUGHT THEM ALL IS AVAILABLE IN HARDBACK HERE